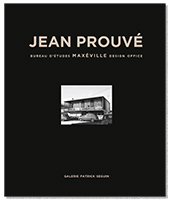 As a participant in the French government’s policy on definitive postwar construction – too timid in his opinion – Jean Prouvé urged a thoroughgoing industrial revolution in the building sector. His immediate contribution was the fine-tuning of the axial frame constructional system he had created and patented before the War. Commissioned by the Minister for Reconstruction, he manufactured in a matter of months a display version, despite shortages and other postwar constraints. The small series of 8×12 m houses – although it took prize in the 1947 Concours des Maisons Nouvelles (New Houses) competition – will in the end go no further. The prototype, stored at the Maxéville plant, will be mounted on site in 1952
to serve as a design office for the Ateliers Jean Prouvé, fast-growing at the time.