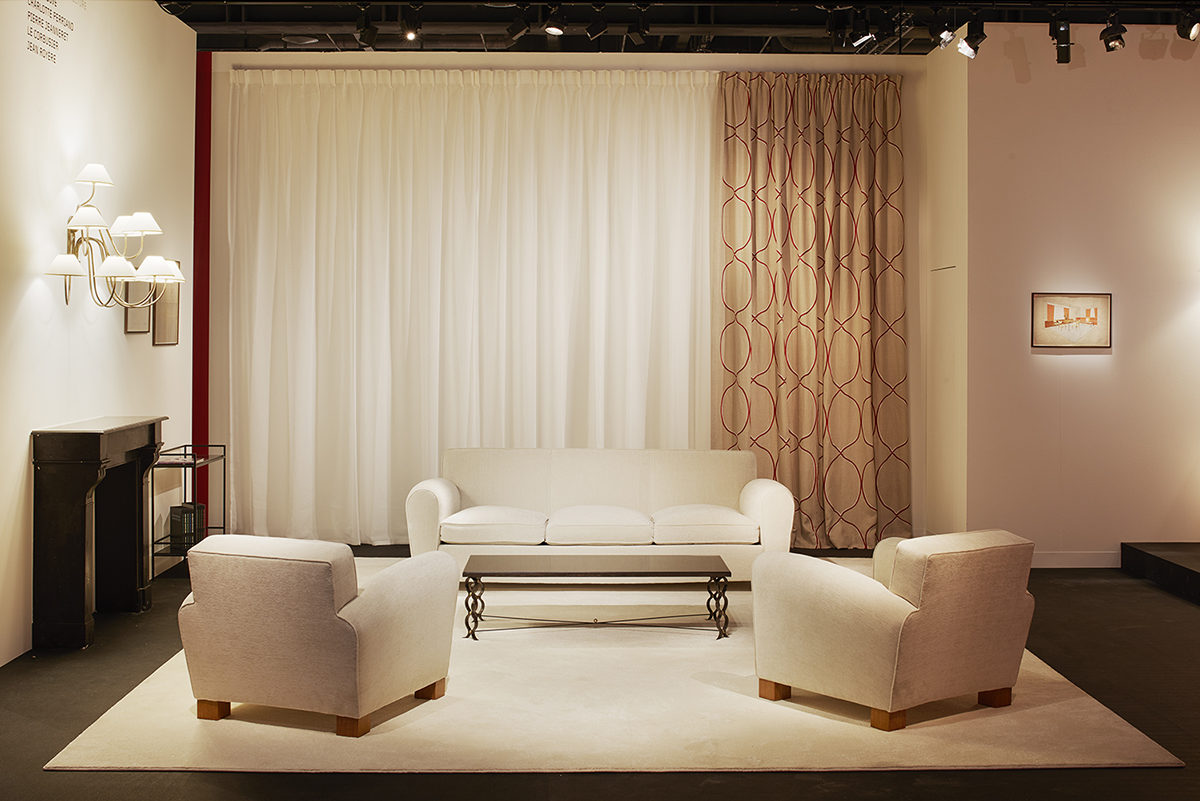 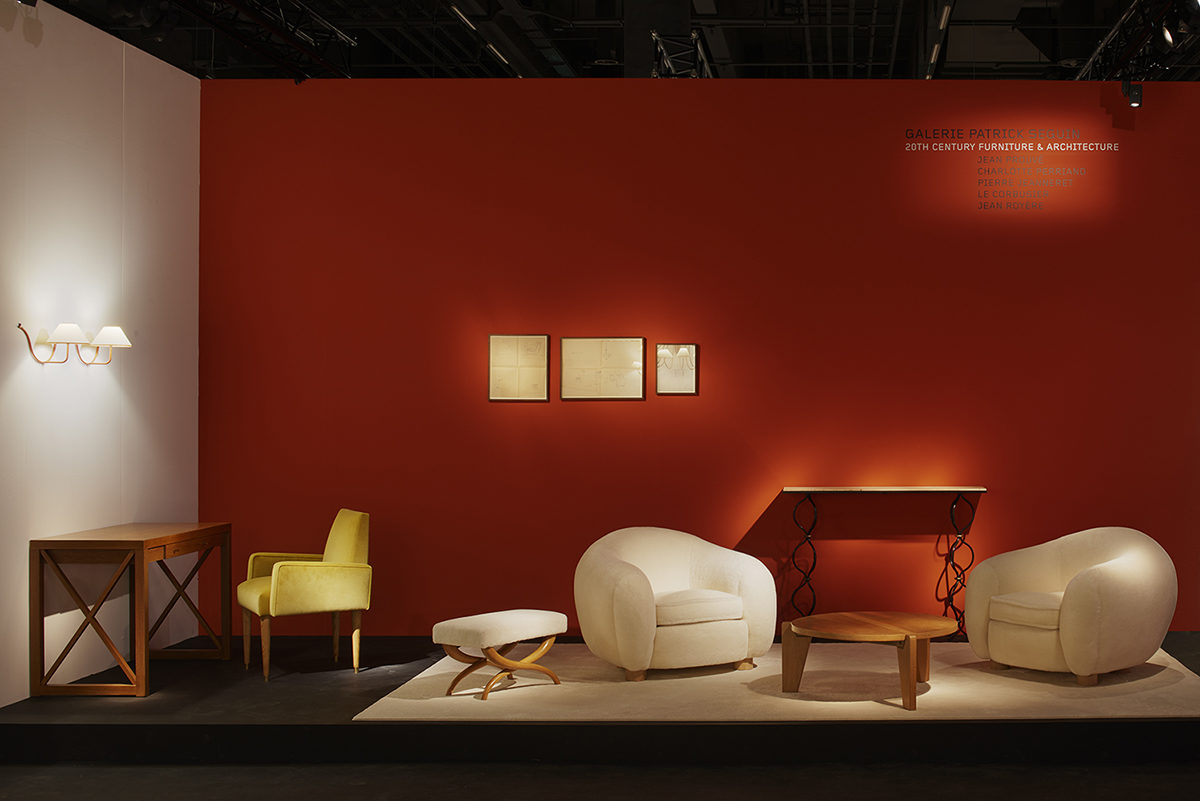 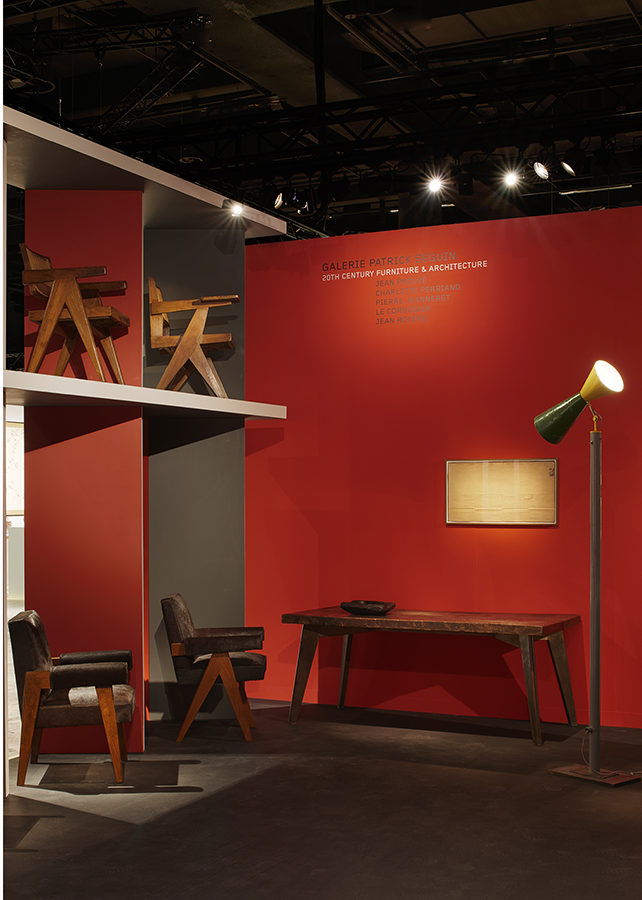 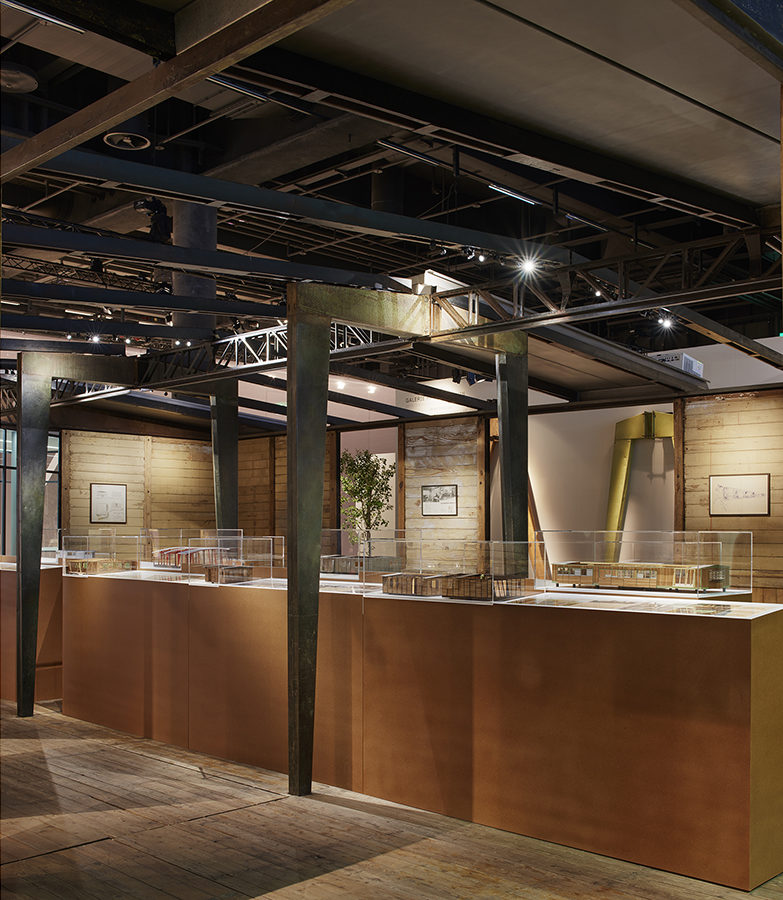 For this fourteenth edition, the gallery has chosen to show a very fine selection of Jean Royère’s furniture, carefully curating a scene to reflect the decorator’s spirit. Included within the display are a pair of Ours Polaire armchairs – a flagship creation within the history of 20th century furniture – a very beautiful Club set, a large Ruban coffee table paired with a lavish Bouquet wall lamp, and a delicate and rare Anneaux console. These pieces not only testify to Jean Royère’s extraordinary creativity, but also the diversity of his inspirations and his influence on the decorative arts to this day.

At the bend of this elegant lounge, a sculptural installation evoking the architecture of Le Corbusier in Chandigarh, offers an overview of the different chairs designed by Pierre Jeanneret for the city’s administrative and public buildings. The display reflects the multiple variants and functionalities of these iconic creations, including the Easy chair, the Library chair, the Office chair, the Type chair, the Class chair, the Senat chair, etc. Other masterpieces on show include an important table by Pierre Jeanneret as well as one of the rare examples of the Diabolo floor lamp designed by Le Corbusier.

SATELLITE For its participation in the Satellite section of Design Miami/ Basel, Galerie Patrick Seguin has chosen to focus on JEAN PROUVÉ’s demountable architecture. The gallery has dedicated itself to this work for many years and holds the largest collection in the world to date.

Thinking that there was no difference between constructing a piece of furniture and a building, Jean Prouvé (1901 – 1984) came up with a “constructive idea” based on a rationale combining manufacturing and function. First produced in small series in the 1930s, his structures were assembled and interconnected via ingenious systems that meant that both furnishings and buildings could be readily modified, dismantled and moved. Continuing his research into demountable houses, in 1938 Prouvé came up with the structural principle of the axial portal frame, which he patented the following year. This pioneering approach was underpinned by a social ideal centered on mass production of industrial items as a contribution to user well-being: light and rapidly assembled, the “factory-made house” was designed to be adaptable as much to extreme conditions as to family life and relaxation. Similarly, the numerous versions of the complex, standardized, and combinable panels were intended to diversify the uses of buildings while at the same time making them more comfortable. Behind an apparent simplicity lay a technical perfectionism that harnessed all the resources of the chosen materials as part of an innovative process developed through experimentation, with an emphasis on economy, lightness and scalability. Thanks to their adaptability and their creator’s prescience, Prouvé’s buildings and architectural components – for the most part originally intended as provisional, portable and removable – now stand out as a plausible alternative response to today’s environmental issues.