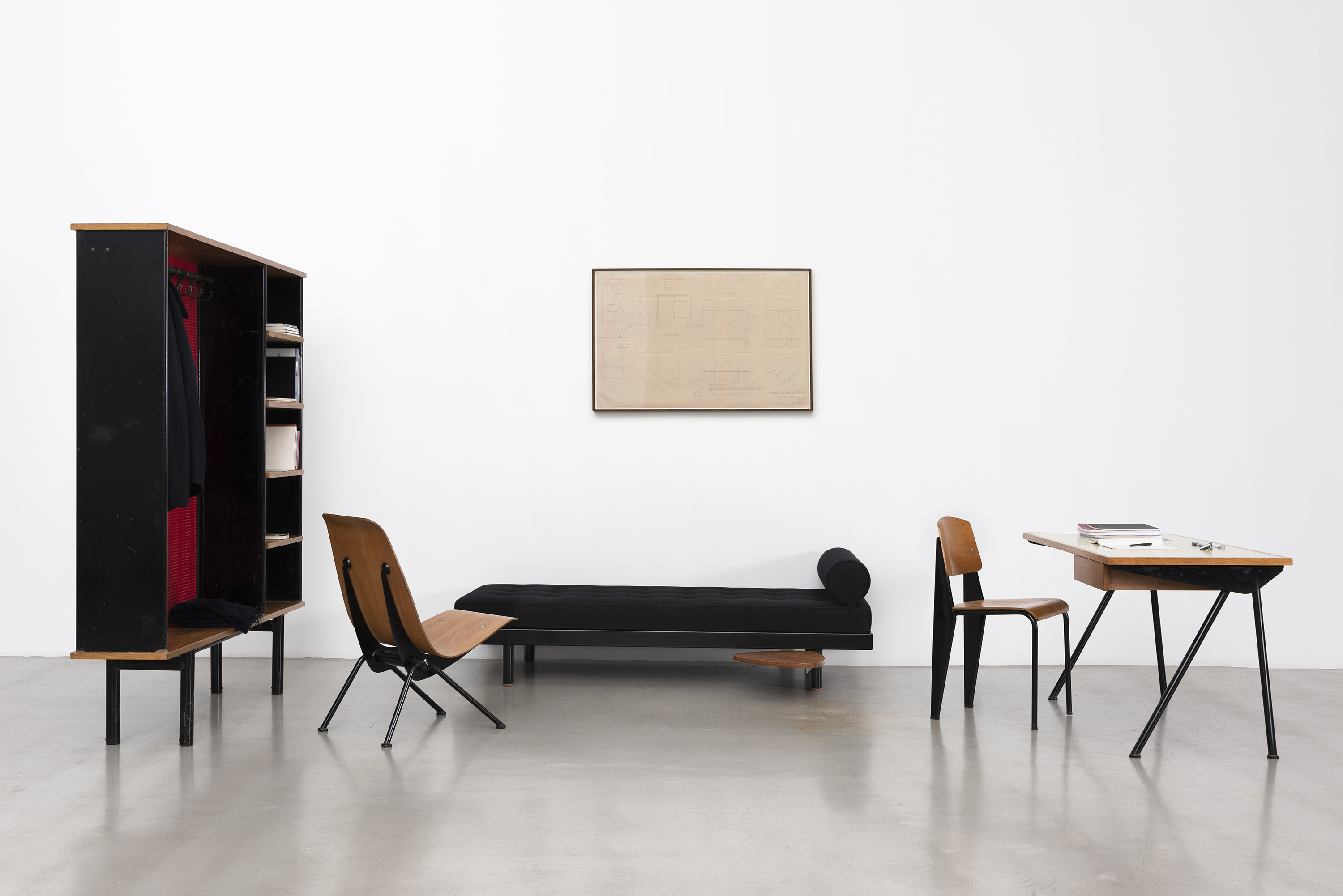 The emerging university market was an opportunity for the ATELIERS JEAN PROUVÉ to work on new furniture models, both light and inexpensive.

Built in 1954 by architect Eugène Beaudouin, the “Cité Universitaire Jean Zay” in Antony near Paris was seen as a model: just as a city, the university accommodation complex included, besides lodgings, three swimming pools, two restaurants, three lecture halls, a theatre, a library, a nursery school, two day nurseries, an infirmary, a social care center and shops.

A first competition is held in March 1951 for the university hall of Residence, for which the Ateliers Jean Prouvé proposed numerous furniture.

A second competition, this time for room furnishing, was launched in the beginning of the year 1955. Several designers were invited to take part in the furnishing of the accommodation complex, among whom JEAN PROUVÉ, who won the order for the furniture of the halls, the restaurants as well as for 148 individual rooms.

The “Cité Universitaire Jean Zay” was inaugurated on December 1, 1955.

The following pieces furnished the refectory and student rooms. 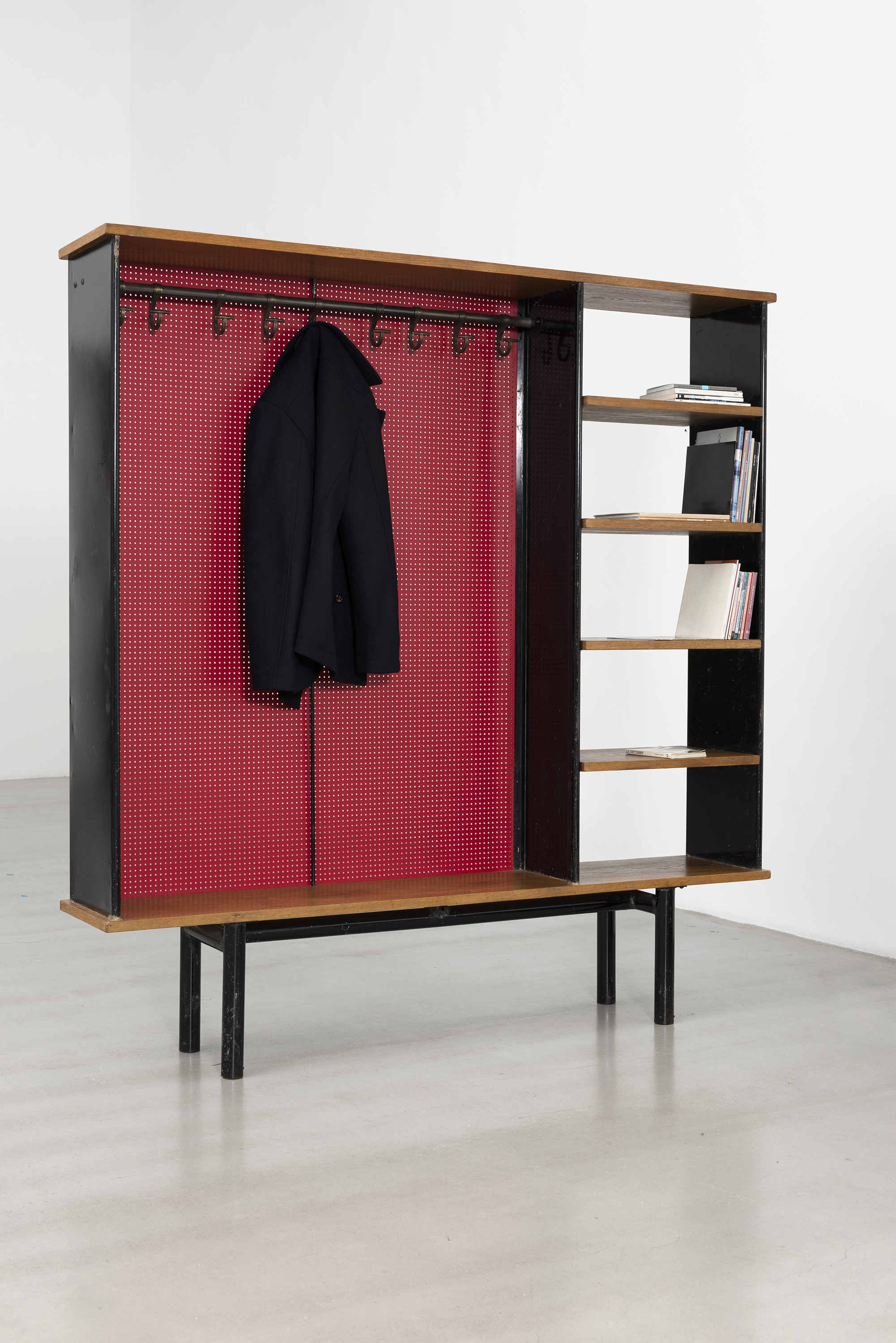 The design of the coatrack that equipped the refectory of the Cité universitaire took into account student’s daily habits and needs within their living space but also the proportions of the rooms. Made of red perforated panels in Isorel assembled with tapped braces to the upper element and its base, the coatrack is an adaptation from the storage units made by Charlotte Perriand for the Hôtel de France in Conakry (Guinea), standing on feet and with no doors. Its distinctive red Isorel panels were also used by Perriand in the making of the wardrobes she designed for the dormitories of the Bellevue secondary school in Meudon in 1952.

Early in 1955 JEAN PROUVÉ designed a “light easy chair” more economical than the Conférence no. 355 model, for the Cité Universitaire in Antony.
The metal frame of this new “relaxation chair” returned to the structural principle of the Maternelle or Compas pieces, with a large-diameter tubular brace to which were welded tubular legs and sheet-metal support brackets. Provisionally called the “seagull chair” given its shape, the seat could be covered with cushioned leatherette for greater comfort. 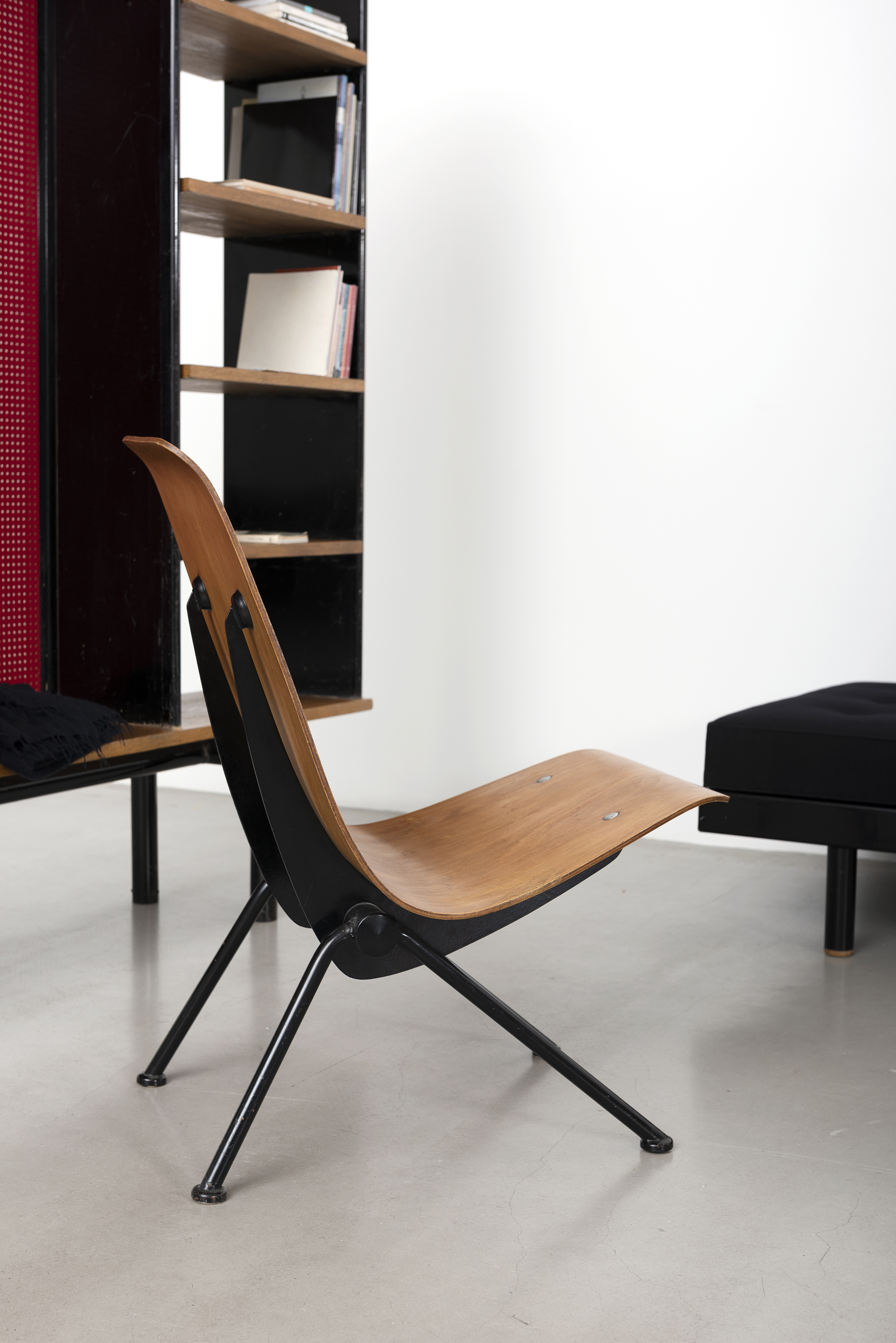 “My creative process imposes from the outset a formative idea that is rigorously realisable.
The formative idea is, above all, the understanding of an ensemble as a whole.” 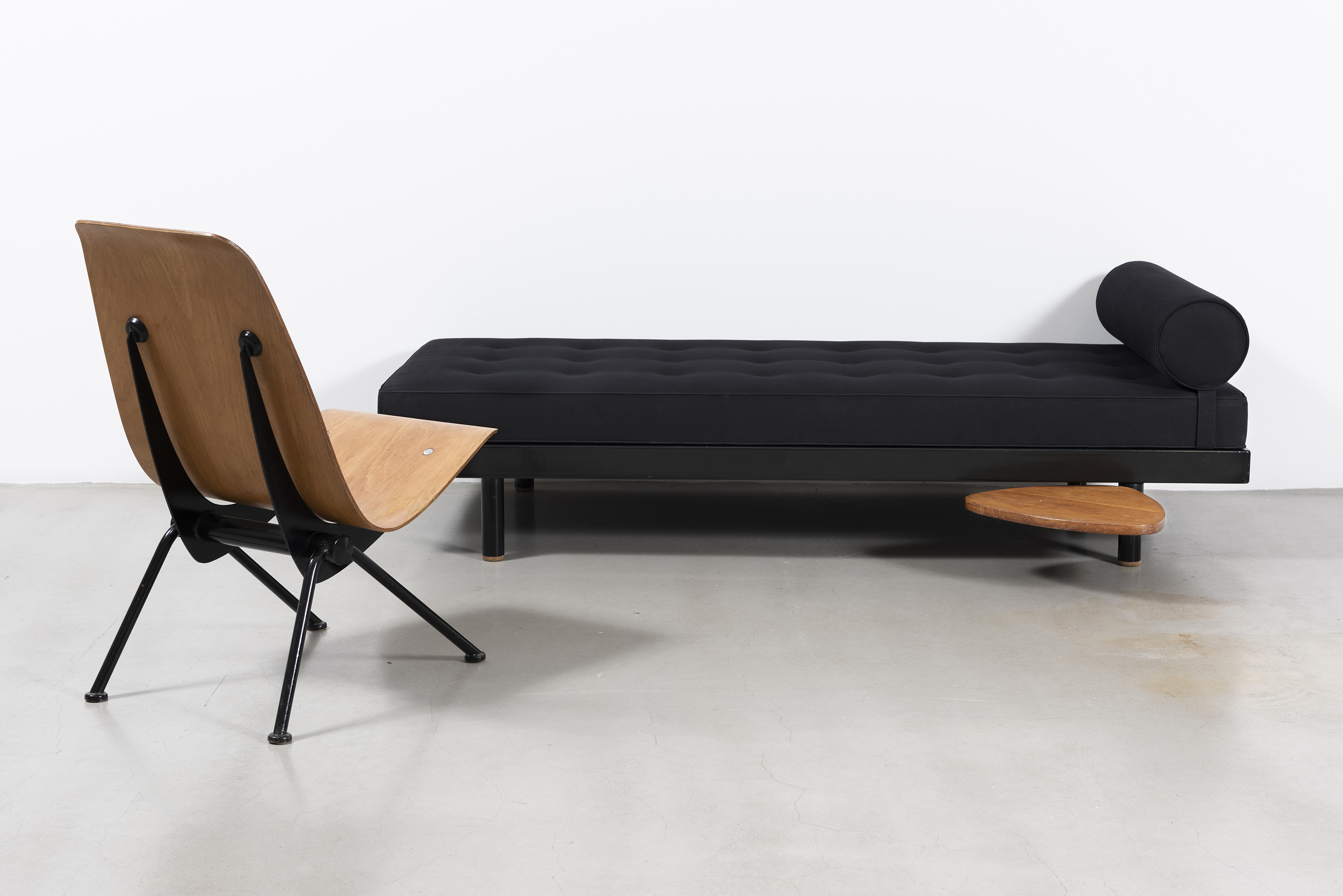 The principle of a bed with a single, closed tube steel frame welded to four tube legs with protective disks is to be found in various ATELIERS JEAN PROUVÉ designs. Early in the War the Ateliers Jean Prouvé provided beds with bent metal frames and tube bases for the staff dormitories at the SCAL plant in Issoire, whence the later name.
The single version with a swiveling tablet was used for the furnishing of the accommodations unit of the Cité Universitaire in Antony.
The swiveling tablet —a solid wood triangular shelf designed by CHARLOTTE PERRIAND— is attached to a metal arm which can itself be folded away under the frame.

DESK WITH COMPAS BASE, VARIANT WITH TUBE LEGS, 1955

The last type of furniture structure created by JEAN PROUVÉ was the Compas base, one of his most iconic creations. Called Compas from the outset, the frame which name alludes to the shape of its legs was used for both tables and desks.
This variant with tube legs from 1955 with a top in laminated wood is conveniently equipped with a drawer. Since he had to adapt to cost constraints, Jean Prouvé decided to resort to the tube —that was available in prefab— rather than to manufacture triangular-section legs.

In 1950 the ATELIERS JEAN PROUVÉ design office was working on a new version of the “semi-metallic” chairs with metal frame and wooden seat and back that would combine the principle of the prewar metal-framed chair no. 4 with the mounting systems of the earlier wood models.
The frame comprised two “uniform strength” pressed steel rear uprights, to which were welded the curved tubes of the front legs, with braces holding them together. The frame of the Métropole seat was notched to receive the backrest and the rear of the plywood seat, which slipped into a slot. The molded plywood components were varnished and the metal parts oven lacquered.

Distributed, then made by Steph Simon until 1969, this model is certainly the best illustration of Prouvé’s plans for mass production. 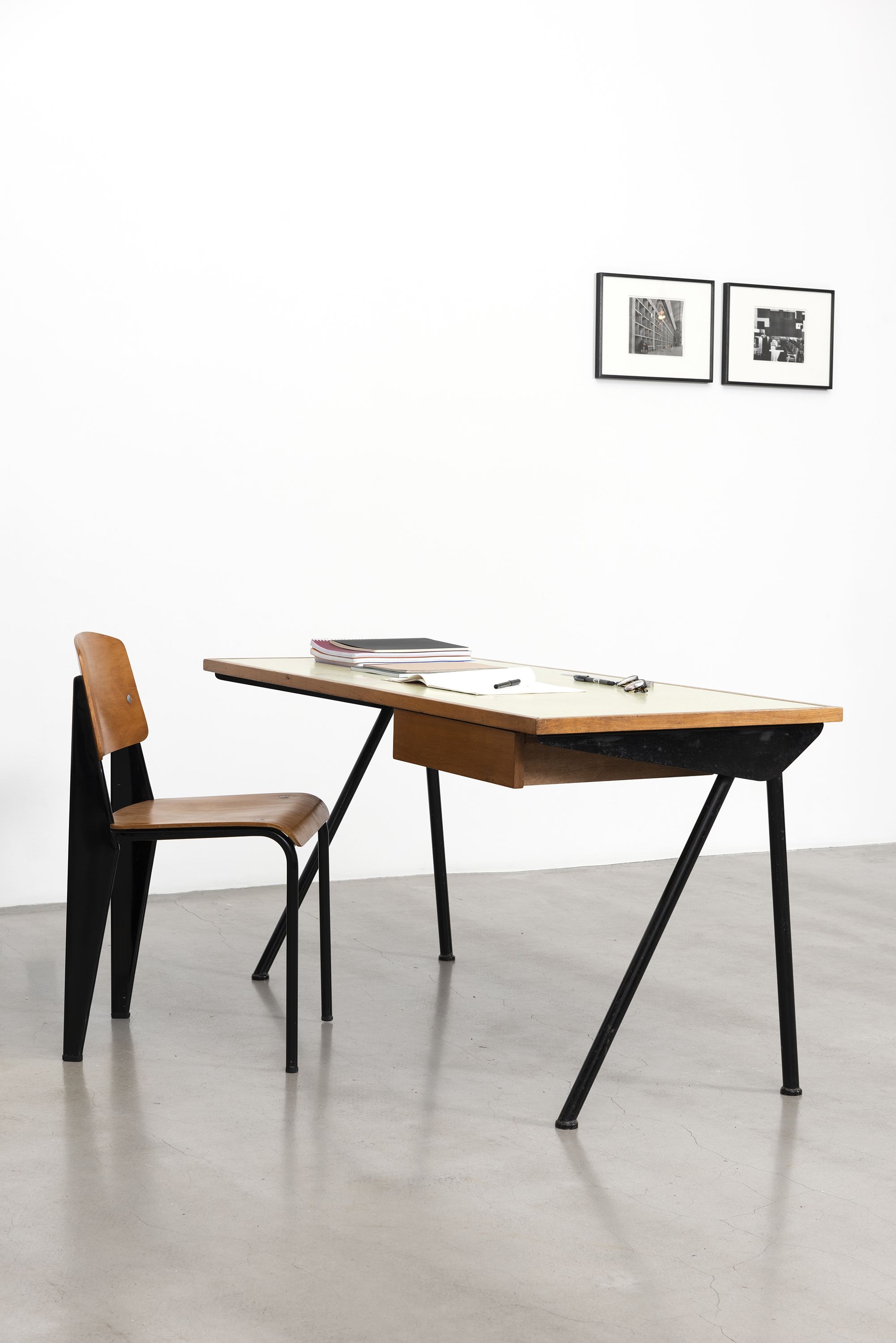