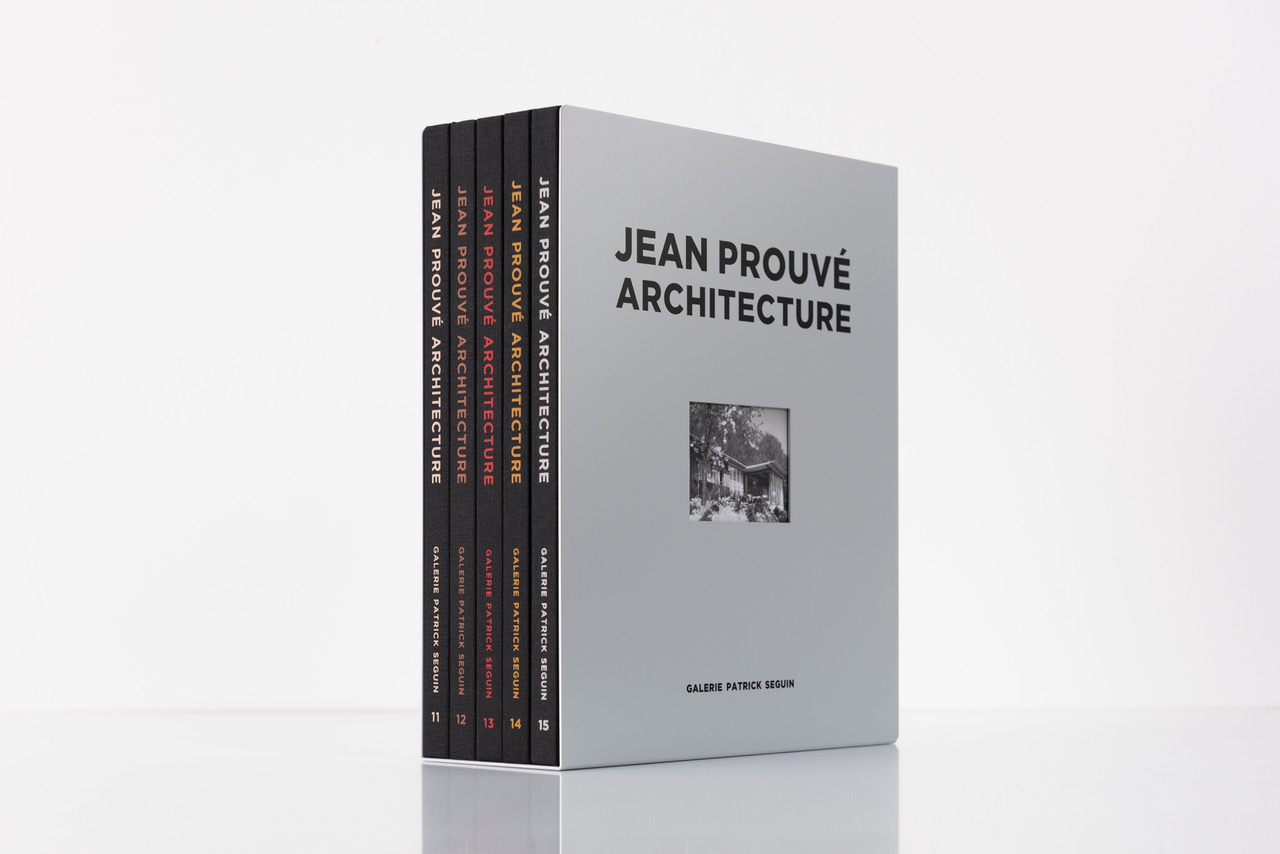 Since its creation in 1989, Galerie Patrick Seguin has worked to document and promote the numerous demountable houses designed by Jean Prouvé, pioneer of the industrial production of furniture and architecture. Developing a « constructional philosophy » based on a logic of fabrication and functionality, Jean Prouvé created, from the 1930s, lightweighted and demountable architecture that still remains a reference to this day.

Galerie Patrick Seguin has assembled the most important and unique collection of these structures by Jean Prouvé, to which the gallery has consecrated a series of publications.

Divided in 3 box sets, each containing 5 monographic volumes, the series of 15 works is aimed at the general public as well as the more well-informed readership. Each book is devoted to an architecture designed by Jean Prouvé, which for the most part are either unique examples, prototypes or manufactured in very limited numbers. Richly illustrated, the volumes present in detail one of Jean Prouvés’ construction systems, the constituent elements and its assembly, both in its historical and contemporary context.

This third 5 volume box set is comprised of the following books, numbered from 11 to 15, also available individually :

As a participant in the French government’s policy on definitive postwar construction – too timid in his opinion – Jean Prouvé urged a thoroughgoing industrial revolution in the building sector. His immediate contribution was the fine-tuning of the axial frame constructional system he had created and patented before the War. Commissioned by the Minister for Reconstruction, he manufactured in a matter of months a display version, despite shortages and other postwar constraints. The small series of 8×12 m houses – although it took prize in the 1947 Concours des Maisons Nouvelles (New Houses) competition – will in the end go no further.
The prototype, stored at the Maxéville plant, will be mounted on site in 1952 to serve as a design office for the Ateliers Jean Prouvé, fast-growing at the time.

At the end of the War, the Ministry of Reconstruction commissioned Jean Prouvé to design moveable pavilions as temporary housing for those who had lost their homes in eastern France. Fine-tuning his already patented axial portal frame system, he replied to the urgency of the situation with a quick, economical and flexible solution. “We need to run a race against time”.
This temporary solution also provided him with a chance to try out an industrial process that could be made more permanent.

Taking part in a Ministry of Education competition in 1949, Jean Prouvé conceived an industrializable and mass-producible rural school. He saw this brief as the chance to engage in the mass production of inexpensive buildings with a wide range of application. In 1950, he is commissioned by the State to produce two school+accommodation prototypes, one in Bouqueval outside Paris, the other at Vantoux near Metz. Despite the success of the demonstration, these two schools were to be the only examples of the substantial series so hoped for by Jean Prouvé.
In 2016, Galerie Patrick Seguin commissioned the Jean Nouvel / HW Architecture studios to adapt this building. Conceived in harmony with the existing materials, the adaptation gives us a full appreciation of the characteristics from the Prouvé structural system.

A result of a close collaboration between Jean Prouvé and architect Pierre Jeanneret, the construction site for the SCAL factory in Issoire represents a significant step in the History of modern architecture. This major project, initiated in a context of war, will allow for a demonstration of a construction prefabricated in the plant and subsequently dry-mounted on site. Jean Prouvé will also use his axial frame constructive system for the very first time.
These avant-garde solutions – practical, economical but also aesthetically pleasing – will retain the attention of the authorities in charge of the postwar construction.

Jean Prouvé’s story is closely tied with that of Nancy. In 1954, he built his family house in the city, a fine example of the technical innovations as well as of the ingenious adaptations of his creator. Mounted within three week-ends only, the Nancy house is one of his most personal creations and shows a process that is environmentally respectful. In 1984, when Prouvé passed away, the building was listed as a Historic Monument on the request of the then Minister of Culture Jack Lang.