A limited edition card game dedicated to JEAN PROUVÉ will be offered to the first twenty lucky purchasers of the two-volume Jean Prouvé box set on our eShop. 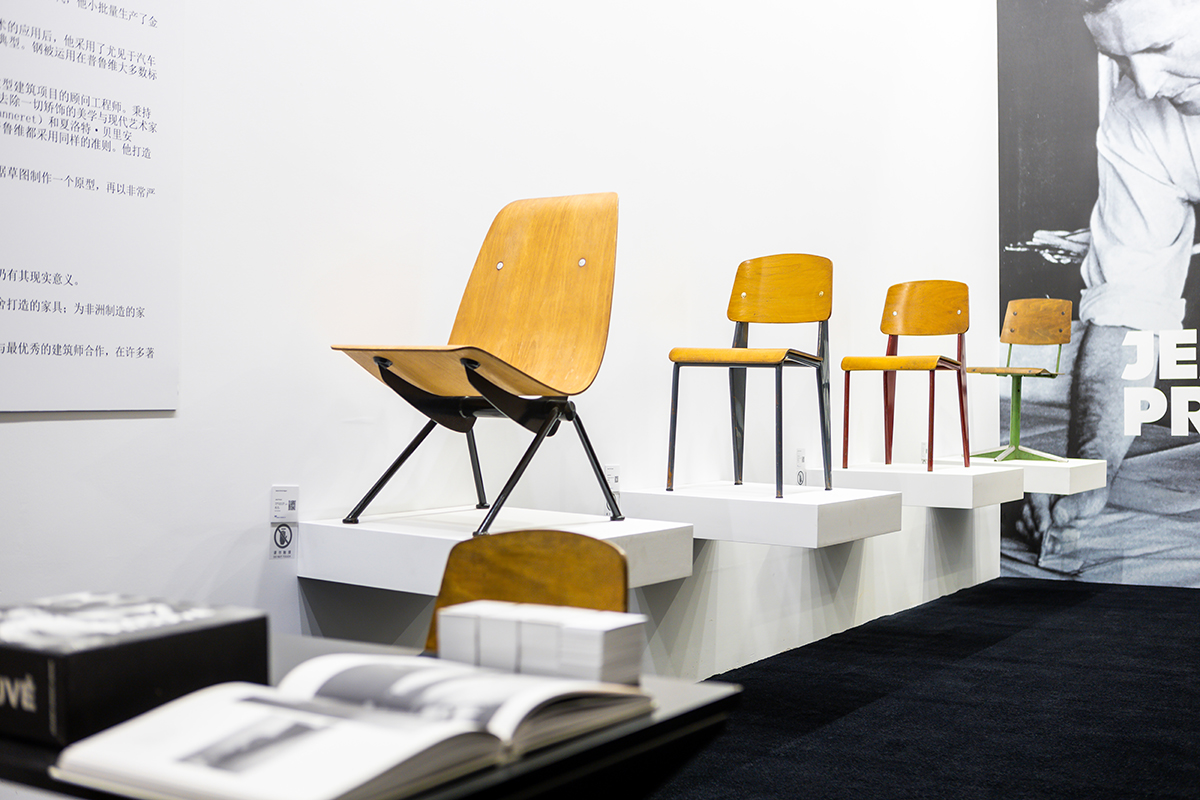 This first collectible design event in Asia, coinciding with Shanghai ArtWeek, will take place within the beautiful No. 1 Waitanyuan venue.

Under the direction of locally based Curatorial Director Aric Chen working in tandem with Deputy Curator Violet Ruhui Wang, our Shanghai debut will explore the theme of Wu Gan: The Art of Design. Including rare and exceptional 20th-century and contemporary design and art, the exhibition will highlight the connection between objects and environments and the aesthetic, emotional, and spiritual experiences they impart.

According to Chen, “Throughout most of Chinese history, little distinction was made between what we now consider to be the separate fields of art and design. It was only with the Industrial Revolution in the West that design became conflated with mass production, form, and function—a constraining definition that has once again expanded in recent decades, alongside definitions of art. By underscoring the narratives, processes, and ideologies.

This Thursday, 21 October, Paris’ Pavillon de l’Arsenal gallery opens ‘L’Empreinte de l’Habitat’ (‘Housing footprint), an exhibition of a hundred years of architectural projects, among which are some that owe their reputation to the architects’ understanding of how to take into consideration the impact of their creations on the surrounding environment.

Among the great architects highlighted in this exhibition, JEAN PROUVÉ and PIERRE JEANNERET are represented, thanks to the participation of Galerie Patrick Seguin, by the 1942 BCC demountable house, archetype par excellence of the different architectural experimentations in lightweight structures in industrialized countries.

Carbon imprint, diminishing quantities of natural resources, and limited space, were all considerations that Jean Prouvé and Pierre Jeanneret managed to incorporate at the heart of their continuous research to improve their constructive systems.

Between 1941 and 1943, limited availability of steel led Jean Prouvé and Pierre Jeanneret to respond to the demand for housing with a version made primarily in wood. The use of the axial portal frame, designed by Jean Prouvé in 1938, allowed for great freedom in spatial organization within the structure by freeing the home of predefined partitions. This ingenuity made it possible to optimize the use of a material by changing the way an existing technology was exploited.

The BCC demountable house designed in 1942 by Jean Prouvé and Pierre Jeanneret holds an important place in the quest for lightweight and modularity in the new ideal of housing between the 1920s and the 2020s. 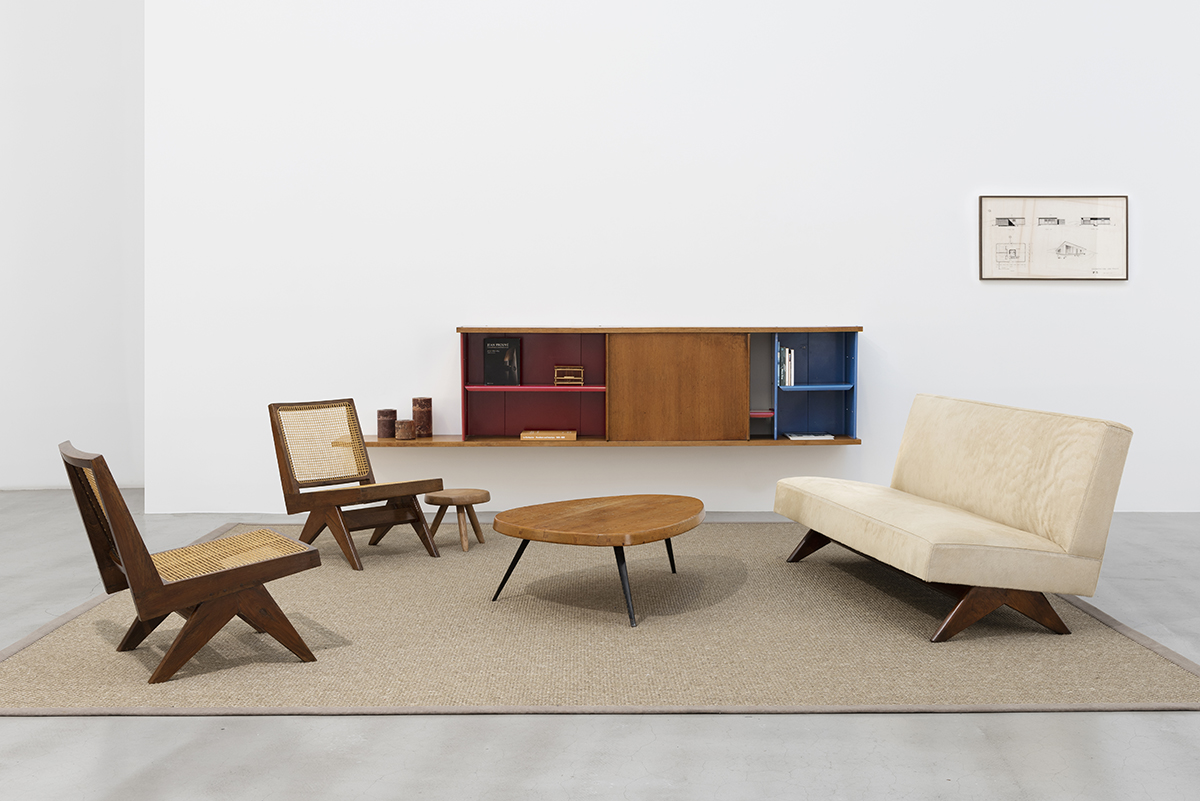 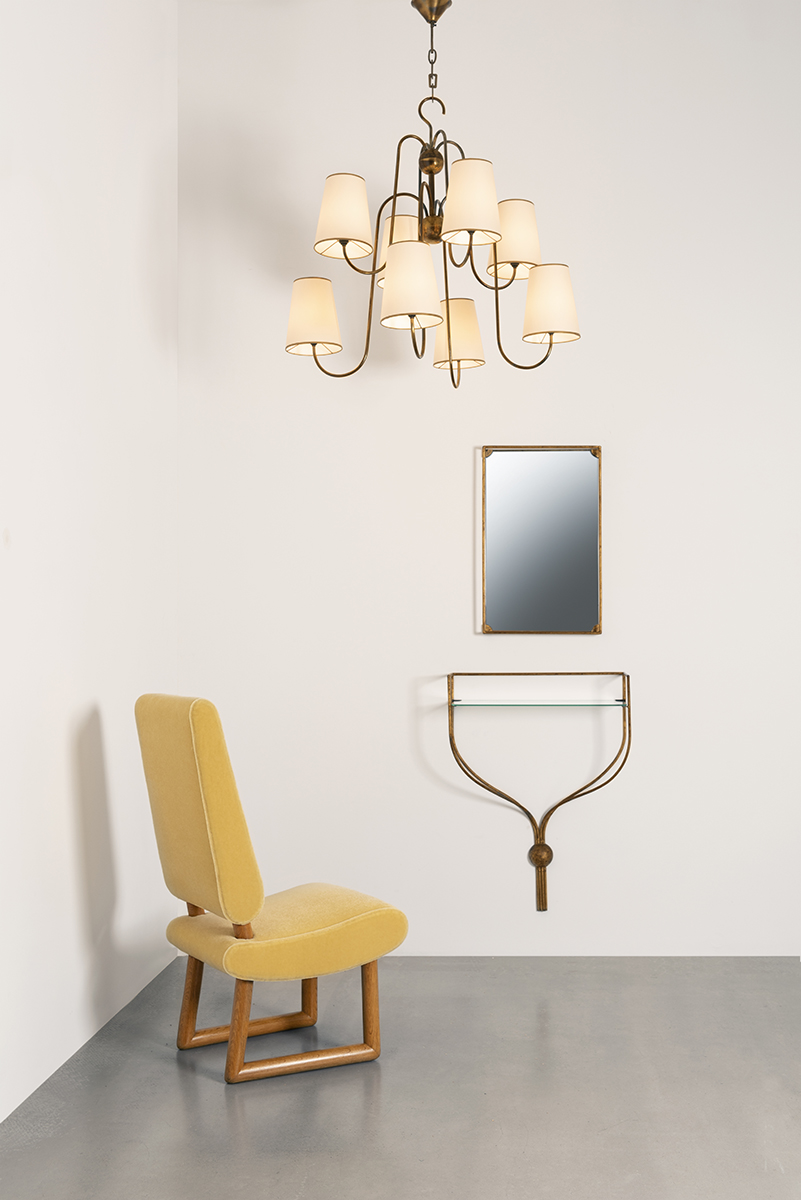 In the context of Fiac from October 21 to 24, the GALERIE PATRICK SEGUIN presents a selection of iconic pieces by JEAN PROUVÉ, CHARLOTTE PERRIAND, PIERRE JEANNERET, LE CORBUSIER and JEAN ROYÈRE.

Being concerned with coherence between form and function, and wishing to exclude any superfluous detail, JEAN PROUVÉ, CHARLOTTE PERRIAND, PIERRE JEANNERET and LE CORBUSIER gave birth to modern furniture and architecture, anticipating the new ways of life which became widespread as the 1950s approached.

Thus the pure lines of the bookcase type Antony (one of the 150 examples made for the Cité Universitaire of Antony near Paris), of a Guéridon GH11 which was part of the collection of Jean Prouvé’s daughter, Françoise, surrounded by three black Métropole chairs, or of Charlotte Perriand’s Forme Libre low table, exemplify this new spirit through their elegant simplicity. In the same manner, the furniture created by Pierre Jeanneret for the City of Chandigarh, such as the elegant Sofa and armless Easy chairs, or again this very rare copy of Le Corbusier’s Diabolo floorstanding uplight , testify to the constant modernity of these creations.

By contrast, countering the prevailing rigidity with whimsicality, humor, metaphor, and color, JEAN ROYÈRE juggled blithely with the lessons of functionalism, as illustrated in the majestic 8-branched Bouquet ceiling lamp and a Visiteur du Soir Chair. 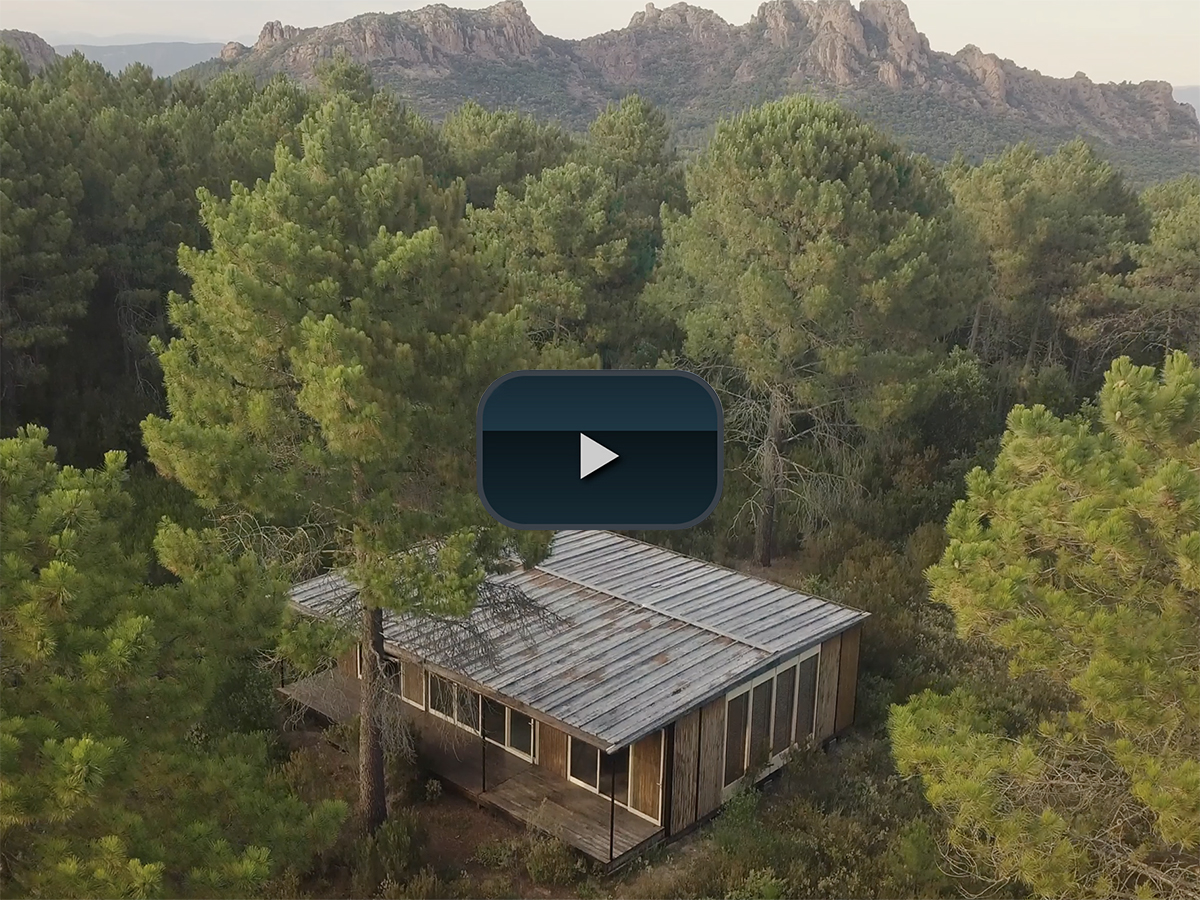 Take a virtual tour of 5 Jean Prouvé demountable houses reassembled in South of France in the middle of a forest of cork oak trees!

JEAN PROUVÉ came to architecture indirectly: driven by his creative spirit to come up with technically innovative components, and aided by the faith a number of architects had in him, he quickly moved into designing whole buildings and honing new construction procedures. The virtues he stressed -lightness, mobility and demountability- enabled him to respond to the post-war emergency housing programs with a view to producing permanent accommodations.

6×6 and 6×9 demountable houses, 1944
At the end of WWII, the Ministry of Reconstruction commissioned Jean Prouvé to design moveable pavilions as temporary housing for those who had lost their homes in eastern France. The area of 6×6 meter laid down by the Ministry of Reconstruction, and later enlarged to 6×9 meter, was partitioned into three rooms immediately habitable on the day of assemblage.

8×8 demountable house, 1945
In 1945 Jean Prouvé considerably improved the basic principle of his war homeless housing and developed an 8×8 meter house -which axial portal frame allowed all sort of variations- based on a 4 meter grid adapted to the capacity of the press at Maxéville. Only two prototypes were made.

Maxéville Design Office, 1948
Intended as a demonstration model that would convince the public of the virtues of prefabricated housing, this semi-metal house was a copybook piece, however it failed to find the success that had been hoped for. This example was set up at the Maxéville plant, where it became the Ateliers Jean Prouvé Design Office.

Rare insight into the philosophy developed by JEAN PROUVÉ through a series of 9 episodes on architecture. Each episode will be dedicated to a specific topic. The episode will be posted on our instagram account from Monday, 14th to Wednesday, 16th June.

This reading table designed by PIERRE JEANNERET was intended for the Legislative Assembly and the University of Punjab library in Chandigarh, India.

Commissionned by Nehru to construct the new capital of the Punjab region when India gained independence in 1947, LE CORBUSIER designed a project that would illustrate the country’s bright future. Pierre Jeanneret, Le Corbusier’s cousin and lifelong collaborator, was entrusted the designing of most of the furniture of the city.

Jeanneret opted for readily available materials, with an emphasis on the different local spieces of wood -here teak- rot-resistant and perfectly adapted to the vicissitude of the climate. The large table top rests on two solid ‘‘angle’’ typeside legs while the lightning is provided by two central reflectors in folded sheet metal, mounted on tubes of lacquered steel. A central slab in frosted glass separates both sides and provides more privacy to readers.

The table can with ease accomodate up to six seats. This elegant yet sturdy model is typical of Jeanneret’s style. 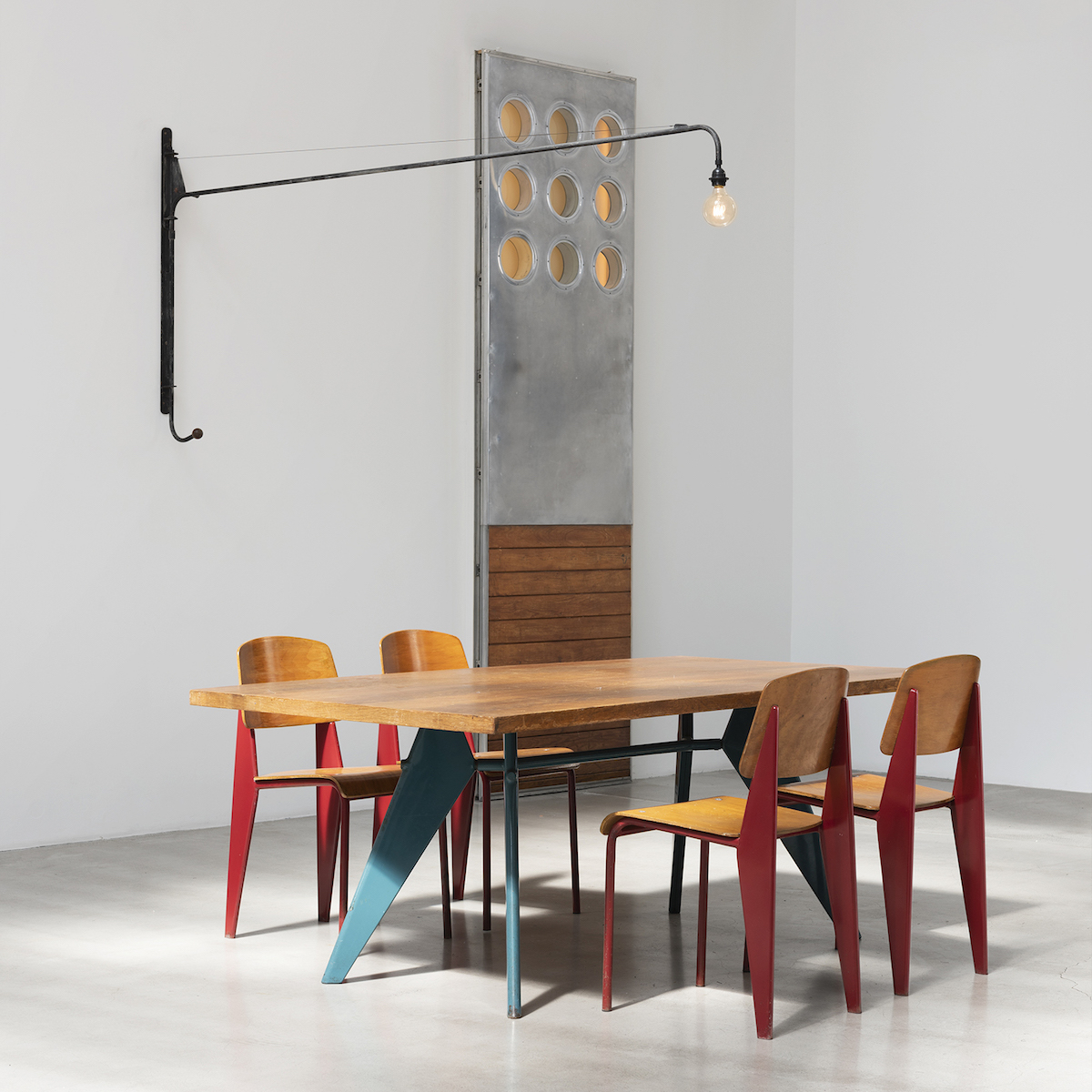 Derived from the prewar prototype, a metal version of the dining table base was finalized in 1951. It originated from dining room furniture that were given the “Meubles de France” award in 1947.

The model was demountable and delivered in kit form with assembly instructions, as evidenced by the protrusion of the cap-ends where the crossmember frame meets the brace connecting the bent steel legs. The base was attached to the crosspieces of the upper frame with brackets and screws.

The piece gave rise to several variants such as the Tropique one that was designed for Air France Congo in Brazzaville (Africa). 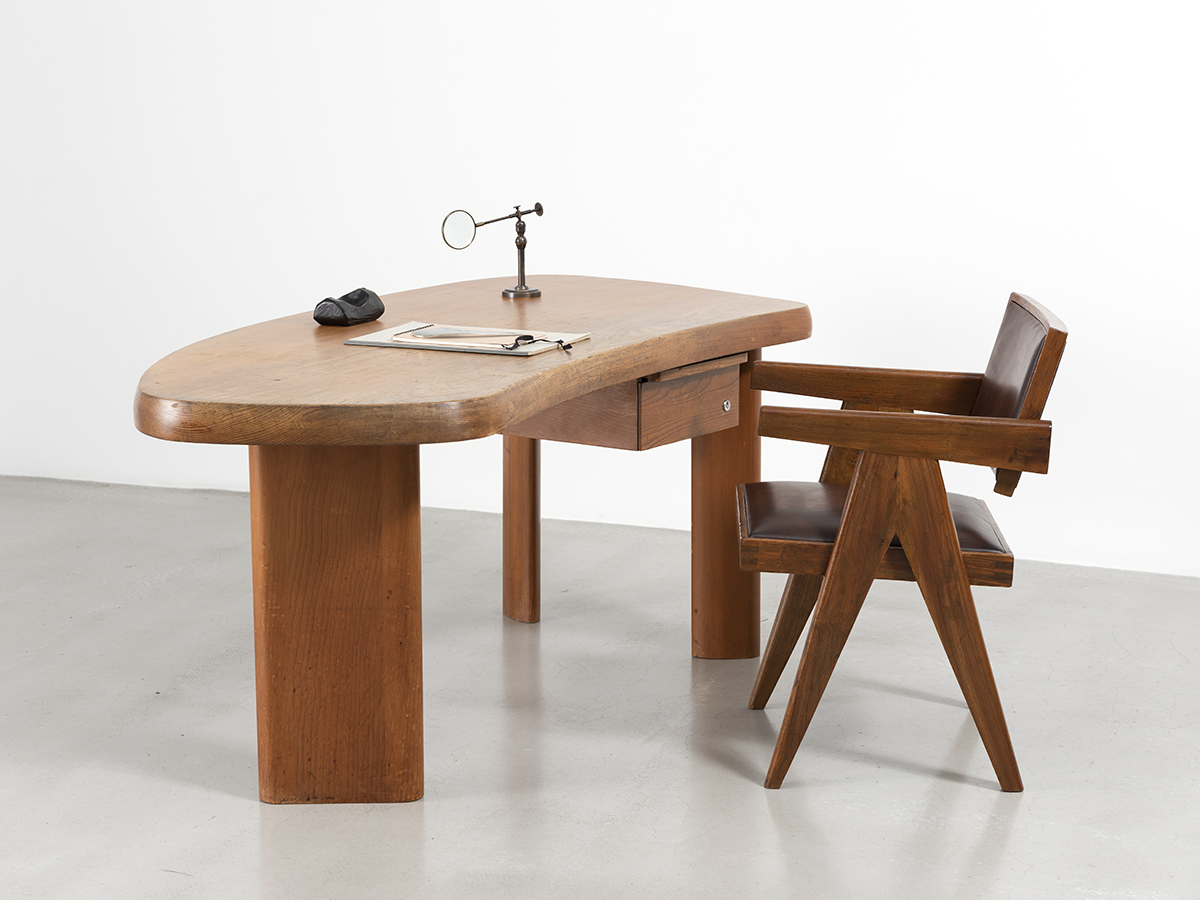 Jean Prouvé, with a pioneering approach to production based on a “constructional philosophy” that applied the same principles to furniture and architecture alike, created timeless works that stood out through their unashamed esthetic. His on going concern with standardization and the modernity of his approach are reflected in the refined Direction Office chair (1951) and Guéridon Haut (1948) on display.

Selected pieces by Jeanneret and Le Corbusier from the landmark project of Chandigarh in India will also be on view. Commissioned by Nehru to construct Chandigarh — the new capital of the Punjab region — when India gained independence in 1947, Le Corbusier designed a project that would illustrate the country’s bright future. Pierre Jeanneret, Le Corbusier’s cousin and lifelong collaborator, was entrusted the designing of most of the furniture of the city. Each piece was intended for a specific place and use, with close attention to the symbolic context and were made in local materials. The Advocate chairs (ca. 1955–56) in teak and hide upholstery for instance were intended for the High Court. Thus the furnishings provide a clear, immediate image of authority and hierarchy.

Freeing herself from conventional aesthetics, Perriand soon turned to working with wood. Her four-year stay in Japan was instrumental in the development of her practice, but it was rather after the War that she developed her own conception of housing to the full, achieving a synthesis of the traditional and the industrial. Two of her most impressive creations, namely the Desk (1952) in pitch pine and the iconic Tokyo bench (1954) that was inspired by traditional Japanese design, will illustrate the refinement of her functional yet elegant pieces in wood.

In Jean Royère’s design vocabulary, simple wavy lines of metal tubing can turn into a light evocative of a luxuriant bouquet such as with the impressive 10-branched wall light (1939) on view. Royère facetiously plays with the floral motif, that quickly becomes the source of an entire array of organic shapes. A great liberty and playfulness exude from this exquisite piece that illustrate themes dear to the decorator: the vegetal and the imaginative realms.